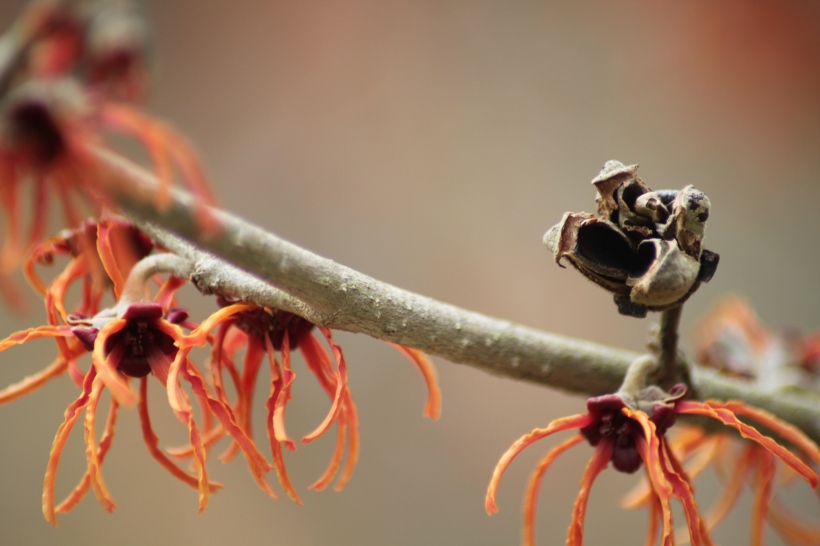 Some of the most fascinating things you learn by accident. That is how I became aware of the forces of the Witch Hazel. I was taking a botanical illustration class at the Morris Arboretum of the University of Pennsylvania and had an assignment to collect some botanical materials to draw in the next class. Being fall, I collected crunchy leaves, seed pods and acorns. I placed everything in a small cardboard box on top of the TV where they would stay, and I wouldn’t lose them, until next class. A couple evenings later I am settling in for the night, curled up in a chair watching what my dad calls “the idiot box”. During a lull in the program I hear a noise. A faint tap. What in the world?

I wander around the room investigating. Looking in nooks and crannies, behind books, under houseplants. Nothing. I stand and listen, turning to focus the sound. I trace it to the vicinity of the TV and narrow it down to that small cardboard box. I cautiously peer inside thinking I have accidentally introduced a small creature into my home. Of course, no noise. So I wait. There it is! Another tap! In the bottom of the box, 1/4″ black seeds I hadn’t collected. The warmth of the room coupled with the added heat from the top of the TV created the perfect condition for the Witch Hazel (Hamamelis sp) seed capsules I collected to start expelling their seeds. Thank goodness, in this Pre-Google era, I was a horticulture student and could run to a text book to find out what was going on.

It turns out that Witch Hazels have explosive seed capsules. This is how they get their progeny out into the world. The witch hazels march through their damp forests and woodland edges 25′ at a time. Well, perhaps not that methodically, but it has been said that these seed capsules can shoot their seeds up to 30′ away from the parent plant. Of course there is a reason for this, if the seeds were to just drop to the ground around the base of the parent plant the seeds would have to compete for water, light and nutrients with the parents. Sending the seed afar into the leaf litter ensures no competition from the next generation. Doesn’t do anything for the seeds that are sent in the plant’s direction by other shrubs in the area, but it’s a start.

Finding Flowers “Out of Season”

So where can you go to see Witch Hazels? You can see our native Witch Hazels in the woods of the East. Along the entire East Coast you will find Hamamelis virginiana, Common Witch Hazel, blooming in the fall. Look for yellow flowers on light gray leafless branches in late October and early November while on a hike through your favorite woods. In the Ozark Plateau of Missouri, Oklahoma and Arkansas you will find the only other Hamamelis native to the United States – Hamamelis vernalis. This large shrub blooms in early spring, often you can spot these spidery spicy scented blooms in February and March. Both of these eject their seeds in the fall. H. virginiana seed capsules take a full year to ripen, dispersing the following fall and H. vernalis disperses in autumn of the same flowering year. Along your hike you may also notice a nice assortment of pollinators attracted to what may be the only flowers in the woods at that time of the year.  Witch Hazel viewing is just one of the many reasons you should get on out into the woods or your favorite natural area in every season. There is nothing like seeing flowers blooming in a snowy landscape to excite the spirit. (Here’s a great New York Times blog post about the magic of our native Witch Hazels)

Speaking of visiting natural places in every season, it just makes sense that I captured these photos of blooming Witch Hazels on a recent visit back to the Morris Arboretum.  It was here that I learned to draw and appreciate the fine details of the Witch Hazel seed capsule and, through my homework assignment, learned first hand about Witch Hazel seed dispersal mechanisms. This Arboretum boasts a diverse assortment of Witch Hazels, from the native species mentioned above to those native to foreign lands. Pictured below you will see some hybrids and species of non-native spring bloomers. Public gardens are terrific places to explore horticultural variety. Wondering what to add to your landscape to fill in a lull of blooming, go to a botanic garden and see what’s blooming there. Wondering how big that Oak tree will get? Go see a full grown one at your local botanical garden. I was at the Morris Arboretum on a blustery March day, with more snow predicted. The gray skies made a perfect canvas for the bright spring bulbs blooming despite the forecast and, of course, for the spidery flowers of the Witch Hazels. There were a handful of people out there, not as many as should be taking in the beauty of these early season blooms. Those who just explore forests, meadows and gardens on the sunny warm days are missing out on a lot. 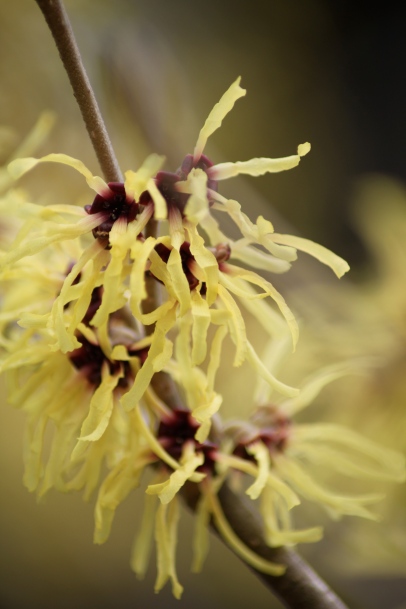 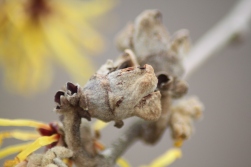 And here’s the result of that Botanical Illustration assignment.

All photographs and content are by the author unless otherwise noted. © Kathleen V Salisbury and HORTravels.com Unauthorized use and/or duplication of this material without express and written permission from this blog’s author and/or owner is strictly prohibited. Excerpts and links may be used, provided that full and clear credit is given to Kathleen V Salisbury and HORTravels with appropriate and specific direction to the original content.
Tim's Ultimate Camping Blog

love each other like you are the lyric to their music