“Oh sweetie, not you, what are you doing here?”

The fact that we are both of-age and the campus wasn’t a dry campus when we both started school (I mean shouldn’t there be a grandfather clause?) and that we didn’t even have anything to drink (honestly!) – we were leaving campus – cooler in tow – for an off-campus party – doesn’t mean anything to these uniformed fellas. I am trying to keep calm and tell the officer that in fact I WILL be graduating tomorrow regardless of what he thinks. He’s telling me I am not going to walk. This is the first time I have been in trouble at college (unless you count the whole outdoor holiday lights inside the dorm debacle) in the 4 years I have been there, and it is the next to last day of school.

The reason the security guard was so surprised to see me was because the only time I’ve been in that small structure was to buy my parking pass. My relationship was fairly new at the time, but I was fairly sure this was not his first run-in with security.  A few hours and a confiscated cooler later, (they decided we weren’t doing anything wrong after-all) we’re allowed to go and I graduated the next day.  If it hadn’t been for the company I was keeping, would I have been in that situation? Probably not, I probably would’ve been reading a book somewhere quiet. But I also wouldn’t have had nearly as much fun, met as many terrific people or had stories to tell.

What’s that old saying about the company you keep?

It’s the same story with Goldenrod. This poor perennial has gotten such a bad reputation, fueled primarily by the company it keeps in the fields it chooses to call home.

Goldenrod, also known as Solidago, is a native perennial blooming in late summer and early fall. Recently I have been traveling to the Delaware River for some kayaking and have been distracted by fields of solid gold along the route.  I have also noticed the flowers blooming along the parking lot edges at my favorite rail trail.

What you don’t notice as you take in the golden glow of the mass of flowers is the nondescript, indistinct flowers blooming at the same time. These are the problem plants, in more ways than one.

Goldenrod has the unfortunate reputation for causing the late summer sneezing fits suffered by many. In fact, this reputation has become so much a part of our culture, florists can’t even use the name Goldenrod when they describe their arrangements. Go ahead – take a look at any florist site online – those yellow “filler flowers”, yep- Goldenrod, posing as an innocent using the pseudonym Solidago.  I have news for you people, it’s goldenrod – just like the kind blooming in the fields all around you right now. And it won’t make you sneeze.

Take a close look at Goldenrod, go ahead, get in close! Trust me – it will not result in watery eyes and a sudden need for a pack of tissues! When you examine Goldenrod you will see a cluster of tiny bright yellow flowers. Why are they so bright? To attract pollinators! Why do they need to attract pollinators? Because their pollen is TOO HEAVY TO FLOAT ON AIR! This means goldenrod pollen would never be floating on air and end up in your nostrils causing distress.

Goldenrod is a pollinator magnet! It provides much needed late season fuel for migrating insects like butterflies, and for bees stocking up energy stores for the winter. Turns out, in general, pollinators and beneficial insects prefer bright clusters of small flowers, like those of goldenrod, to single large flowers.

On your late-summer adventures you will probably notice Goldenrod wherever you roam. There are woodland, seashore, mountain and meadow species.

So what is causing me to sneeze?

It’s the company Goldenrod keeps. Take a closer look at the field or at the roadsides and you will notice another plant in abundance. It is flowering but you may not notice it. This plant can have dull boring flowers because it doesn’t need to attract pollinators, it is pollinated by the wind.

Common Ragweed (Ambrosia artemesiifolia) and Great Ragweed (Ambrosia trifida) can be found nearly anyplace Goldenrod will grow. Believe it or not, these annuals are native plants. Ragweed is notorious for the airborne pollen that enters breathing passages in late summer and early fall causing watery eyes and sneezing (or so I’m told, not being a sufferer myself). Though both species cause an allergic reaction in many, they are pretty distinct in appearance. Giant Ragweed sports large lobed leaves and shoots up to 12′ in a season. 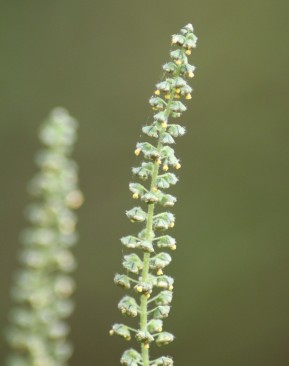 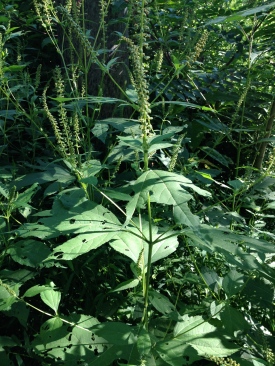 Common Ragweed only reaches 1/3 of the height and has finely dissected leaves. Two things to notice on the Common Ragweed pictures. 1. Dare I say ornamental purple stems? 2. Notice the larger green structures at the bottom of the flower stalk? Those are female flowers, while the male flowers are the smaller ones above.

Get a good look, this is what is causing your sneezing. NOT Goldenrod!

Another troublemaker Goldenrod is often seen hanging out with is Mugwort (Artemesia vulgaris).  Blooming at the same time as Goldenrod and wind pollinated, Mugwort is a European perennial brought here by first settlers for medicinal purposes and was used by early Europeans to flavor beer, before they figured out hops are a much tastier way to do that. Today Mugwort is notorious for invading garden edges and roadsides, but not too many people speak of its allergenic qualities. Yes Mugwort, too, causes the hay fever for which Goldenrod so often gets the blame. 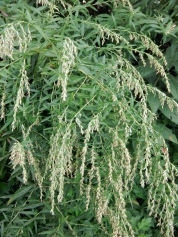 Finding the Good in the Bad

Perhaps Goldenrod isn’t so crazy after all, hanging out with the “bad kids” of meadows and roadsides. Goldenrod can identify. Many many people think of goldenrod as a weed despite the fact that it is an important pollinator plant and even has some economic potential. New Jersey’s own Thomas Edison founded the Edison Botanic Research Corporation of Fort Myers (I guess Florida can claim him as well) and tested more than 17,000 plants for their ability to produce rubber – did I mention his business partner in this venture was Henry Firestone…yes, THAT Firestone. After all the tests were finished, he determined Goldenrod has the best potential for rubber production and after years of breeding, created a 10′ tall plant that yielded 12%rubber.

Just as “weedy” Goldenrod has lots of positive attributes and potential, so too does our native Ragweed and yes, even, the invading Mugwort. According to Peter Del Tredici in Wild Urban Plants of the Northeast Common Ragweed has been found to accumulate lead from the soil. This is a valuable characteristic and may give the much maligned ragweed a new public persona. It has the potential for being used in phytoremediation projects, cleaning up the many brown fields sites around the country. (Find out if you have a Brownfield Site near you) Del Tredici also mentions Mugwort as a potential player in the phytoremediation game. It has an ability to absorb heavy metals (zinc, copper, lead and cadmium) from the soil as well. 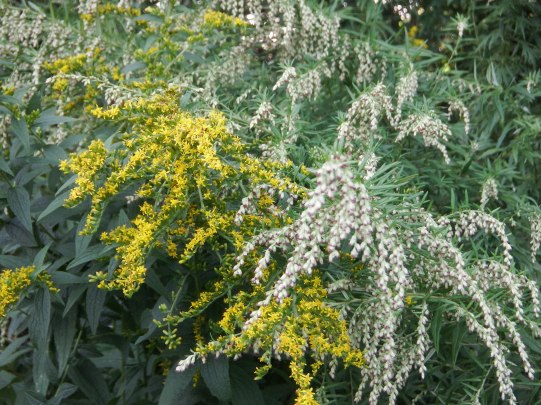 The saying goes “You are the Company You Keep”. I knew something about my companion that other people didn’t see, in all these years I have had more fun than I ever could have imagined and yes, sometimes, it requires bending the rules a little. I feel we balance each other out and have both grown from our relationship.

Goldenrod has been defined by the company it keeps as well. Perhaps the reputations and understanding of the value of all of these plants will balance out too as people come to understand the benefits of these “bad kids” of horticulture.

All photographs and content are by the author unless otherwise noted. © Kathleen V Salisbury and HORTravels.com Unauthorized use and/or duplication of this material without express and written permission from this blog’s author and/or owner is strictly prohibited. Excerpts and links may be used, provided that full and clear credit is given to Kathleen V Salisbury and HORTravels with appropriate and specific direction to the original content.
elleguyence

Verse from an adverse mind.

Its all about believing in our internal desire.

By the pricking of my thumbs...

Life is a broadway musical and everyday is a song. These are mine manifested as poetry.

I AIM TO PLEASE THE YOUNG AND YOUNG AT HEART WITH POEMS DESIGNED FOR KIDS. READ ALONG WITH YOUR SMALL TOTS FOR FUN.. LET'S MAKE RHYMING FUN AND EXCITING!!!

Adventures in a fold-able kayak

The universe is a big place, perhaps the biggest.