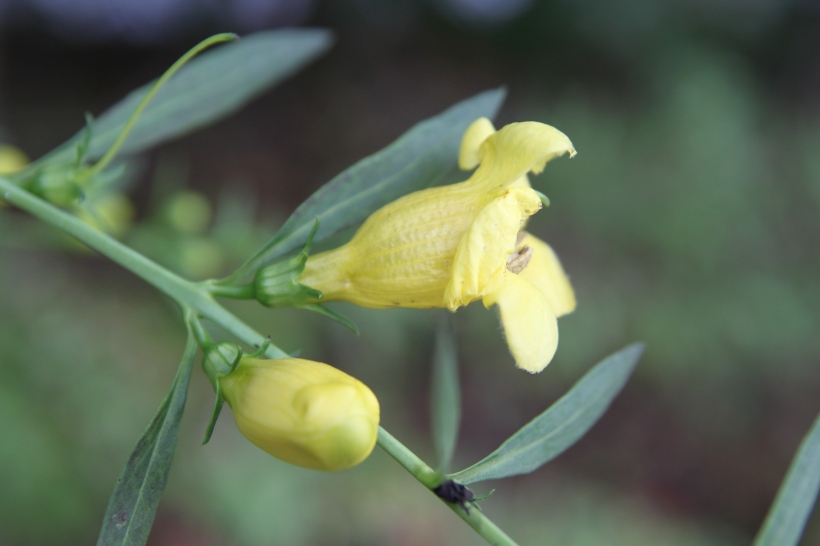 Moving to a new state, even just across one big river, can lead to interesting new discoveries.  Two horticultural discoveries have intrigued me since I have moved here. These are two late summer blooming flowers I was unfamiliar with until I started exploring the natural areas around the place I now call home.

I first noticed this in a giant clump following a small stream near our house. What struck me was how big they were. When I first spotted them they were flowerless and I mistook them for New York Ironweed (Vernonia noveboracensis). It wasn’t until I wandered down the street for a closer look that I confirmed, much to my great disappointment, they were not New York Ironweed.

A couple days later these tall plants started blooming. Bright yellow flowers atop 7 foot tall stems. They were not Compass Plant, Sunflowers, or any other tall yellow-flowering plant I was  familiar with at the time. But they were anything but disappointing!

This was a mystery plant for me and I started looking very closely at the details. What stuck out were the wings. All along the stem of the plant were green wings. It really was like nothing I had seen. So interesting. So I headed home with visions of wings and yellow flowers in my head and started researching these plants.

How the wingstem got its name.

According to The Plants of Pennsylvania Wingstem thrives in moist wooded slopes, river banks and shaded lowlands.  Sometimes called Yellow Ironweed  (Aha! See I wasn’t crazy thinking they were Ironweed at first!) these perennials are threatened in New York State. Their August and September blooms attract a wide variety of pollinators, providing late season food when not a lot of other native plants seem to be blooming.  If you care to take a closer look at these flowers, you may see the initials FACW after the name. This means the plant is a Facultative Wetland plant – it normally occurs in wetlands but may be found in drier areas. Wingstem can be found in New York south to Florida and west to Texas and Nebraska. Wingstem is a composite flower, made up of showy ray flowers (the petals) and less-showy disc flowers (the center). For a terrific explanation of the purpose of composite flowers as well as some stunning photography, be sure to visit this most recent The Natural Web blog post.  It is a cousin to the familiar sunflower, asters and is related to New York Ironweed.

Frequently described as weedy, this plant will spread easily from seed and through underground roots forming dense clumps. It will be a great plant for filling in that challenging shady wet spot in your yard, but it will need room to roam.

You will often find long-tongued bees on these flowers. Insects with short tongues have trouble reaching the nectar in these droopy blooms.  Though bees find these flowers nourishing, deer and rabbit avoid the bitter leaves. This may be one to try in your yard if you have deer and rabbits in abundance. 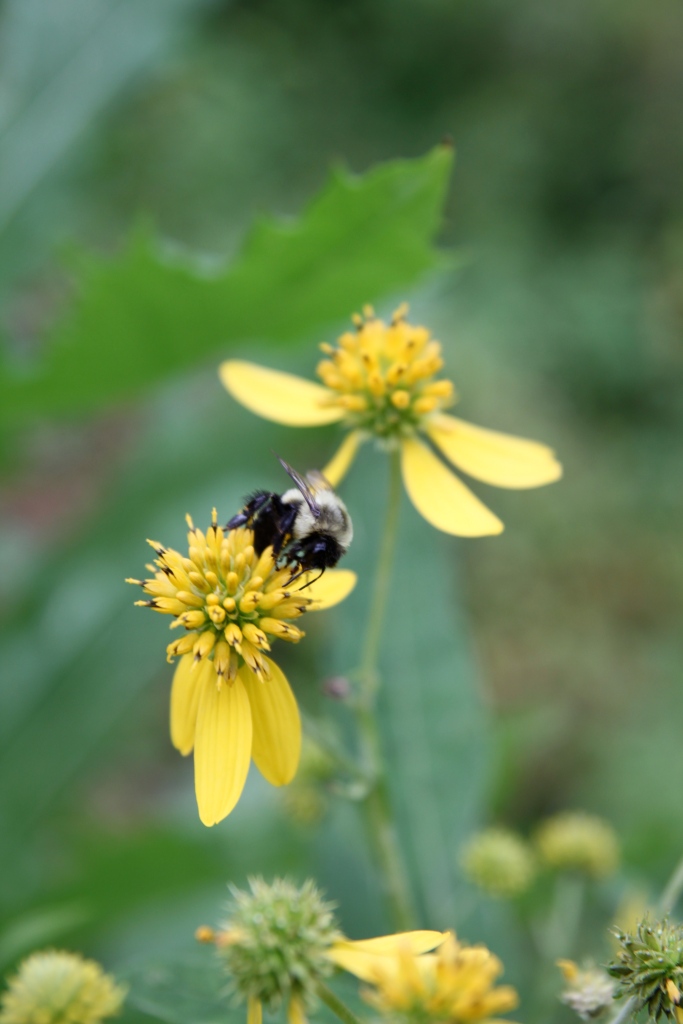 Can you tell if this bee has a long tongue?

I have been collecting seed and spreading it in a constantly damp area in our woods, in the hopes that it will fill in, shade out some unwanted plants we have there and survive the constant onslaught by the deer. And if they can feed some of those long-tongued insects, all the better!

While I believe the Wingstem will easily establish in our wooded yard, this other flower will be significantly more of a challenge. And unlike ticks, this is a parasite I would welcome to the woods!

Smooth Yellow False Foxglove (Aureolaria flava also known as Gerardia flava) has intrigued me since I first discovered it after moving to the area. I happened upon it along my local rail trail. It was blooming in August underneath some oak trees between the gravel of the rail trail and the banks of a lake. Shaded and dry most of the time the 2-3″ lemon yellow flowers on tall stems are a welcome sight in the late summer woodland.  Without the flowers, this perennial may look like a bit like a weed. 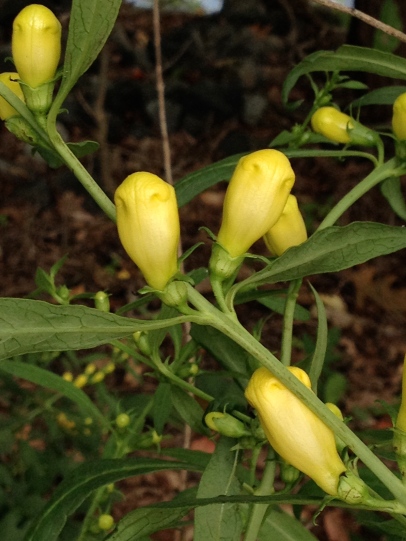 Does Anyone Else think these Flower buds of Yellow False Foxglove look like dog noses?

The leaves of Yellow False Foxglove 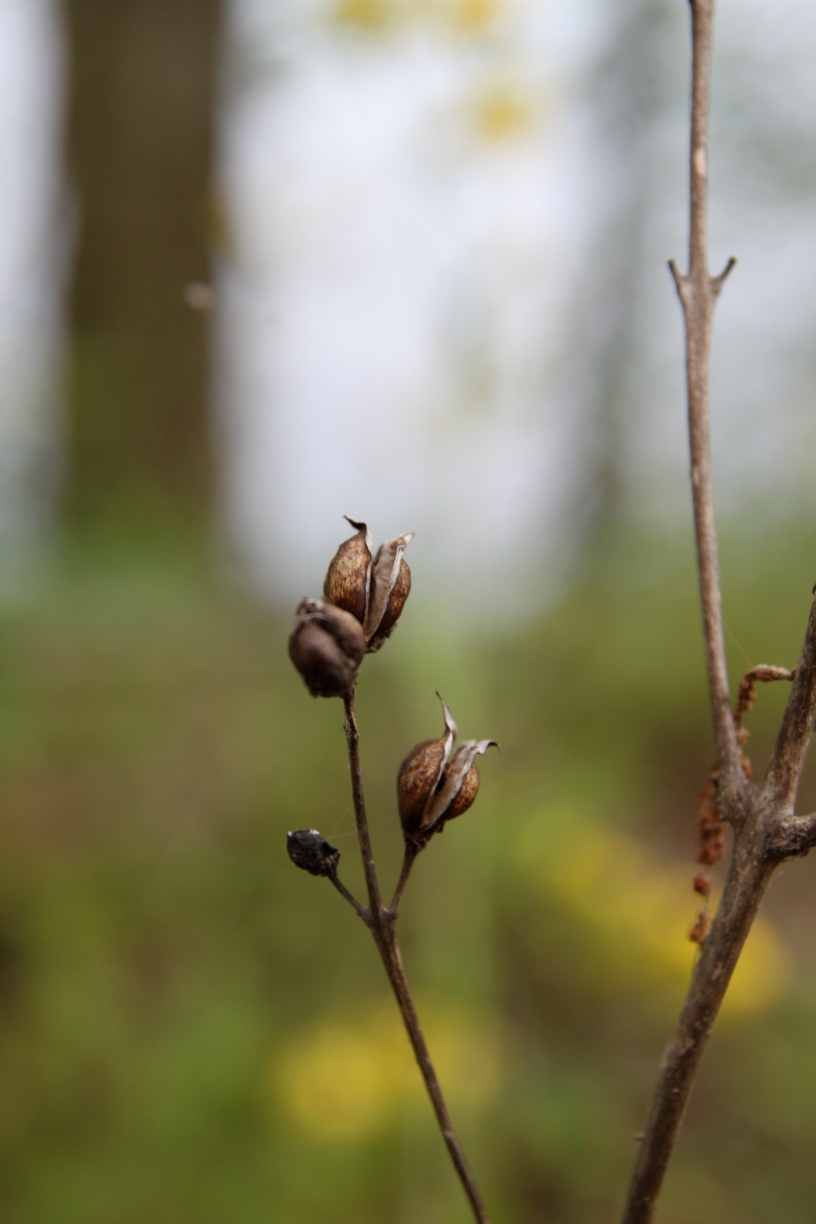 There are plants out there that get their nutrients from other plants. They are parasitic, meaning they get food from the host plant, surviving as long as the host plant survives.  These Smooth Yellow False Foxglove plants are partially parasitic – hemiparasitic. They have green leaves, which means they can photosynthesize, creating their own food from the energy of the sun (you must know the process, it’s the basis for survival of all life on Earth!). But in addition to the food they create themselves they get a little extra from the oaks they grow beneath. According to Go Botany the plants develop “specialized roots called haustoria …which transfer sugars and proteins from the host plant to the parasite.” This is different than the Pink Lady Slipper Orchid which survives in symbiosis with a fungus in the soil, meaning both organisms get a benefit from the relationship. 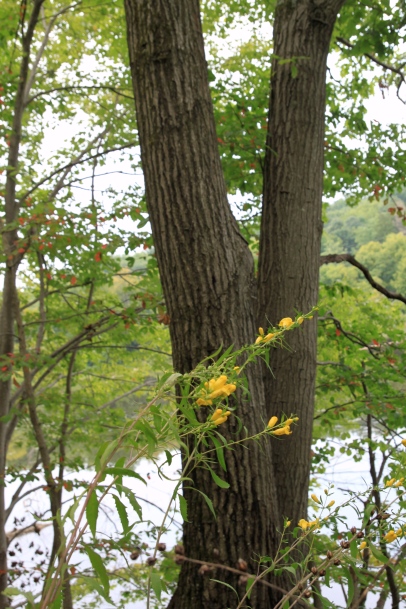 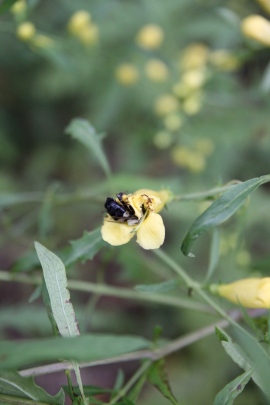 If you are looking to see these in-person go on a late-summer adventure, pull out a map of the US, draw a straight line from the tip of Maine to the panhandle of Texas and explore any oak forest south of that line. You should find them. Enjoy them in their shaded home. Marvel at the work being done by the leaves and beneath the soil’s surface to create and sustain the beauty you are lucky enough to witness.

Along the banks of a lake, under red and white oaks, next to a gravelly trail – I found Yellow False Foxglove.

I have enjoyed tremendously exploring my new plant communities. Learning about these plants I have never experienced only connects me more to my new found home. What new-to-you plants have you discovered in a new location?

All photographs and content are by the author unless otherwise noted. © Kathleen V Salisbury and HORTravels.com Unauthorized use and/or duplication of this material without express and written permission from this blog’s author and/or owner is strictly prohibited. Excerpts and links may be used, provided that full and clear credit is given to Kathleen V Salisbury and HORTravels with appropriate and specific direction to the original content.
Jojo Al-waealy

Seeking Solace in the Horizon of Life & Beyond.

An Original Blend of Perfume and Poetry

Its all about believing in our internal desire.

By the pricking of my thumbs...