A Small Section of the sprawling Moravian Pottery and Tile Works, notice the intricate tiles, different, adorning each chimney.

The wonderful thing about horticulture and being interested in and looking for all things plants is you find them where you least expect them. On this day we ventured to a place I have driven by countless times in my many years spent in Doylestown but have never ventured inside.

The Moravian Pottery and Tile Works is located in Doylestown, PA. Registered as a national historic landmark, this sprawling concrete structure still produces hand-made tiles using the methods and molds from when this factory began in the late 1800s.  After a welcome and paying a very reasonable admission fee, we entered the studio and watched a video about the history of the place and of Henry Chapman Mercer – the pottery’s founder and builder. I am particularly fond of Mr. Mercer, him having the same affinity for and appreciation of the powers of concrete as I grew up witnessing in my father.  If you are wondering just how that is represented all you need to do is look closely at the construction of Henry Mercer’s pottery works, home – Fonthill Castle – and the Mercer Museum all of which are built of the slurry of cement, water, sand and cast over structural supports such as rebar and wire mesh, some of which you can see in the nooks and crannies of the pottery works. 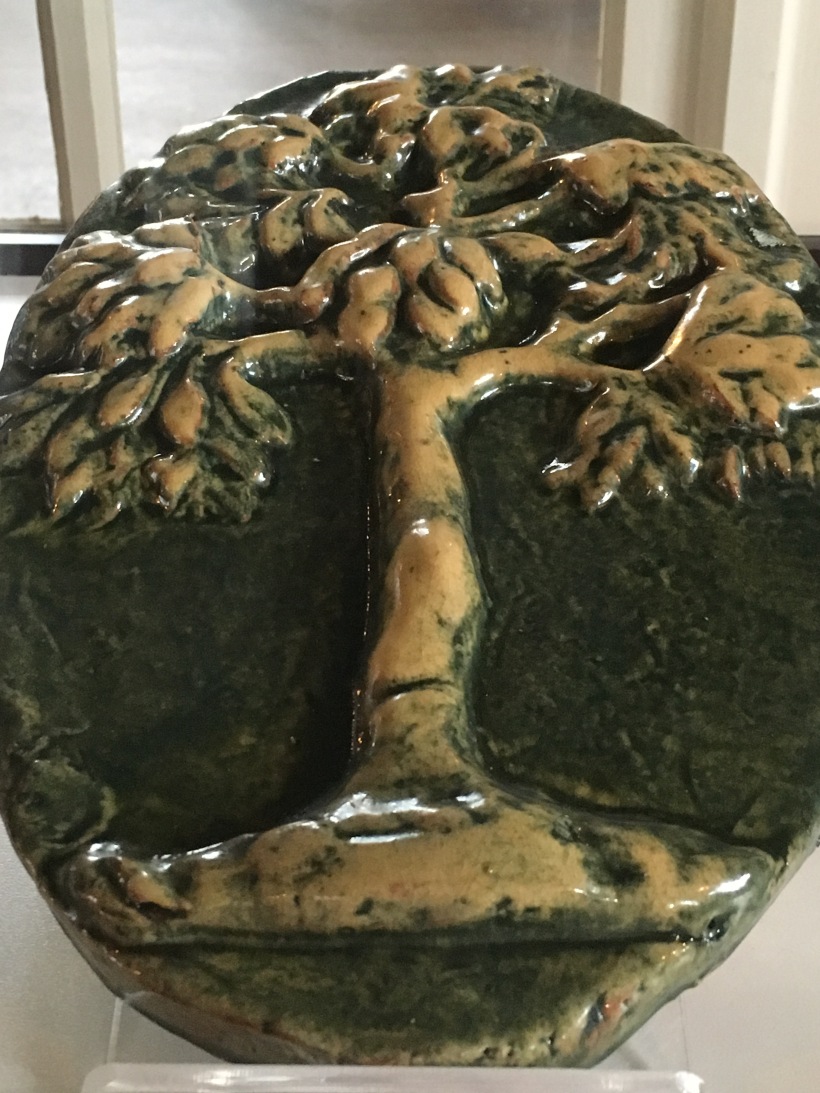 According to interpretation in the display the mold for this Green tree Tile was “cast directly from the iron surface of a fire mark, those emblems prominently displayed on houses in early Philadelphia designating the homeowner’s fire protection company”

Mercer’s interest was in saving the hands-on, low-tech hand-crafted nature of much of what was produced before the industrial revolution.  To this end he created the pottery and tile works as well as amassing an extraordinary collection of tools and equipment “made obsolete by industrialization”.

Tile of Two Men Cutting Down a Tree

But beyond the appreciation for the way things used to be done and the mysteries of concrete, I also found vivid flowers and interesting references to nature inside this cool gray building on this cold, gray, Christmas Eve visit.

One of Mercer’s goals, in addition to his saving the past, was to identify and label the trees on his property. So his pottery and tile works created pottery tree labels. And here, on display is a lesson in taxonomy and scientific name changes as well as an idea of the plants that were once found on his properties.  You can find stacks of these tiles behind glass in the exhibit and pressed into a concrete (naturally) wall at the entrance of the museum.  You are able to order these tiles for your own home or nursery or public garden, though they will only print the original names from the original molds, no updates with the recent accepted scientific names are available. 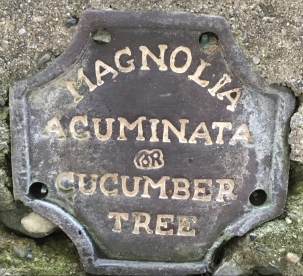 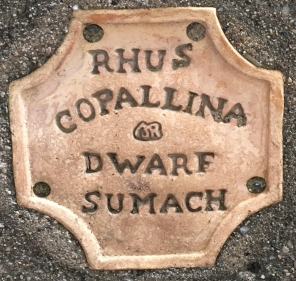 Familiar names were written on some of the tiles. While on others, scientific names no longer used, kind of like the tools Mercer was so passionate about collecting, are on display: 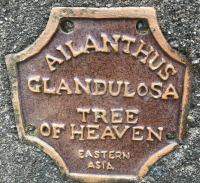 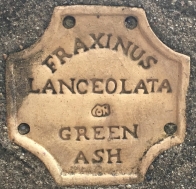 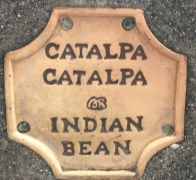 Notice the plants exotic to the country are labeled with country of origin at the bottom.

Acer dasycarpum – now Acer saccharinum  – the Silver Maple. I sort of which the former name stuck, it is much more distinguishable from the Sugar Maple – Acer saccharum.

Ailanthus glandulosa makes much more sense when you know that one of the identifying characteristics are tiny glands on the lower leaflets. Altissima translates to ‘high’, leading to the tree name Tree of Heaven, which really doesn’t tell you much about the tree at all.  BTW the Genus name Ailanthus also translates to sky which also lends itself to the common name Tree of Heaven. So the former scientific name sort of translated to tall tree with glands. this is a helpful description. The new name sort of translates to tall tree that is tall. Hmmm… I wonder why so many folks are scared of scientific names!

Paulownia imperialis has become Paulownia tomentosa for the Empress Tree.

The Northern Catalpa –Catalpa catalpa became Catalpa speciosa. This former name is known as a tautonym. Tautonyms are scientific names where the genus and the species are the same word. Often found on zoology, the naming of animals, these double names were expressly prohibited in botany retroactively meaning all of these double names had to be changed.  Thus names like Catalpa catalpa became Catalpa speciosa, but the name for the bison – Bison bison and the Anhinga Anhinga anhinga and many others remain in use today. 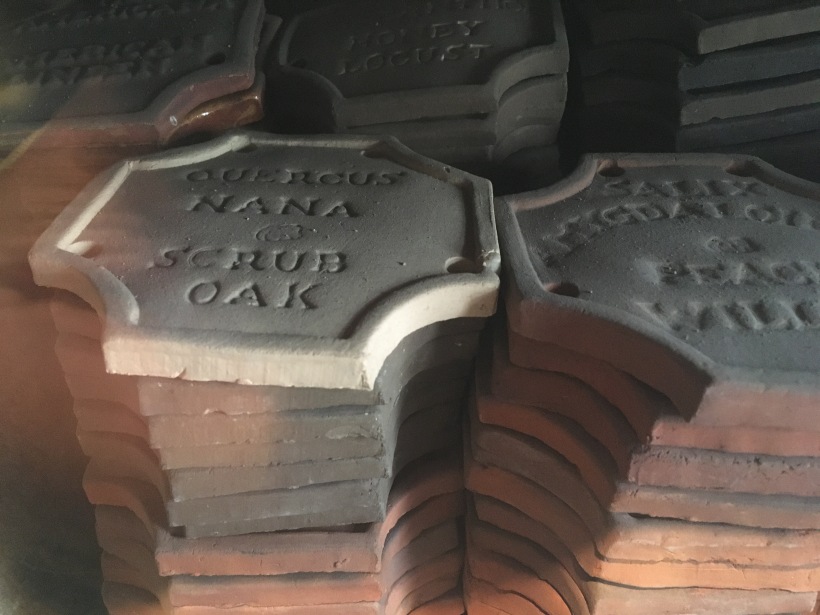 These old names were all new to me. Of course they had me thinking – We know why knowing and using scientific names for living organisms is important, but why do scientific names of plants change?

There are a few reasons why scientific names change. Most recently we have been inundated by name changes. Simple Aster becomes either Aster or Symphyotrichum or Eurybia or Doellingeria or Solidago or Oreostemma based on new chromasomal evidence showing distinct traits between European and North American species.  And this is part of the trend of name change based on laboratory examined genetic traits and chromosomal assessments rather than field observed observable characteristics that botanists used to lump plants into groups in the past.

Early on, in some cases they have found that the same plant has been given different scientific names in different parts of the world. For a long time before our global trade and easy global communication and transportation those plants remained seemingly independent and distinct, but soon enough a botanist encounters a plant in a land far away that is very reminiscent of one they know very well, research ensues and they are found to be identical and one has to change their name.  The other name now becomes a synonym for the current accepted name.

As with Catalpa catalpa it could be that the rules of binomial nomenclature changed.

And so a spontaneous visit to a pottery museum turns into a horticultural exploration and lesson, as it should be. Always. There is so much horticulture to find in our every day culture. 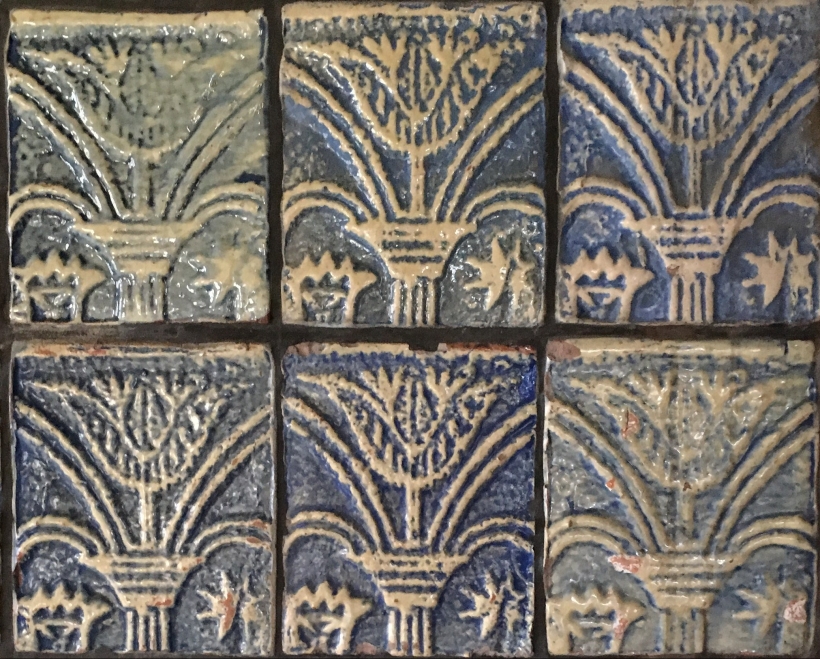 All photographs and content are by the author unless otherwise noted. © Kathleen V Salisbury and HORTravels.com Unauthorized use and/or duplication of this material without express and written permission from this blog’s author and/or owner is strictly prohibited. Excerpts and links may be used, provided that full and clear credit is given to Kathleen V Salisbury and HORTravels with appropriate and specific direction to the original content.
Off-Road Society